Words and interview by Joe Zadeh

I still remember the first time I heard Portishead – the iconic Bristol band of which Adrian Utley has been a multi-instrumentalist and co-producer/writer since 1991. I was 7 years old and my bald uncle (Anthony, not Colin or Andrew – I have three bald uncles) was sleeping on the sofa in our living room. He’d lost his job on the chemical plant in Middlesbrough, and moved in with us, bringing all his stuff with him. ‘All his stuff’ comprised of two stuffed bin bags, a bottle of Davidoff, and mountains upon mountains upon mountains upon mountains of vinyl records. I was amazed by it; everyone else was disgusted.

Each morning, while he lay red-faced and snoring on the sofa, I’d scan through his collection to find the most visually appealing cover, then I’d wake him up, and ask him to play it for me. Through this method I discovered Spiders by Space, Parklife by Blur, and Mr Blobby by Mr Blobby. One morning, I was struck by the velvet blue artwork of Portishead’s Dummy. It didn’t look that amazing, but the idea of a record called Dummy – one of the most brutal and destructive words in my 7 year old vocabulary – seemed both hilarious and pretty much illegal. He placed the record on the spindle, and skipped the needle to track seven (“Numb”). I don’t remember my exact thoughts, but I know it sounded like a mad concoction of everything that then amazed me in the world: outer space, underwater, the paranormal, the life of adults. It was like the lights in my imagination had flickered on, revealing to me that my mind was actually maybe a warehouse and not just a box in a closet under the stairs.

All of this is to say that – both in Portishead and in all of his other projects over the last forty plus years – Adrian Utley is a true genius of using music to convey thoughts, images, moods and emotions, in ways that are often hard to describe. People know this, and that’s why everyone from every genre wants to work with him. He’s been a long time collaborator for Goldfrapp, recorded with Marilyn Manson, made music with Patti Smith and PJ Harvey, and created sonic soundscapes for the National Trust, so people can enjoy music as they wander through the woods of Croft Castle in Herefordshire. This year alone he was the producer on the critically acclaimed new album from Algiers, The Underside of Power (a thunderous and experimental fusion of punk and gospel), has recorded synths for 4AD signed musician Torres, and played synth for Anna Calvi.

Now, he has joined Nadine Shah to become one of five ambassadors for Independent Venue Week 2018. As a seasoned veteran of the music industry, he has a deep emotional connection to the music venues and pubs up and down the country, which he cut his teeth in and built the foundations of his diverse career. In the following conversation, I caught up with Utley to discuss mood music, song writing retreats, and the importance of independent venues.

Hi, Adrian. You’ve been making music at an alarming rate for nearly four decades now. Is creating even a conscious decision anymore? Or is it just some invisible thrust that propels you on?

I can’t think in any other way. It has always been a natural thing for me to make music, ever since I was at art school. If you’ve got a passion for something, it naturally drives you.

I actually said to my girlfriend the other day, ‘If I didn’t do music what would I do?’ – because I recently injured my back and my hand didn’t work for 3 months. After 42 years of playing, I suddenly had to think ‘My god, what do I do if I can’t play?’ Luckily, I’m getting it sorted out.

Tell me about the role independent venues played for you in those 42 years.

They are something we need in our lives as musicians, and they are slowly being eroded. My early life, from 18 to 35, was taken up entirely by playing these places. They were a training ground – essential to our development and finances – and also a community where you would meet other bands. It was my life.

What was special about that life?

Well, it was just so exciting to rock up at a pub or a venue, with my guitar and my amp, and play to people. It was a massive buzz. The miles of travelling, the hellish shitty service stations, the pissing rain, the cold venues, the fact you’ve smoked too many fags, and drank too much the night before – all of that stuff I could do without. But the buzz of playing and making music with people in that setting was priceless. To go from that to playing 30,000 later in your life, it was fine because you’d already done 15 years of hammering it around the circuit of Europe’s small venues. I can’t even imagine playing those gigs if I hadn’t done all that before.

After all this time, how do you tap into making music that still excites you?

I never stop finding things that excite me. I am perpetually looking for things. I love what I do, and though it’s my way of making a living, it’s also my absolute passion. Playing the guitar, listening to music, learning music, talking about music – the learning will never ever stop for me.

So your curiosity drives you?

Yes, and I’m always looking forward. When people introduce me to something new, it opens up to me. Recently, somebody sent me some links to some Irish music. So, I went on a journey through YouTube of traditional Irish fiddle players, into traditional old school singers. Another day I might be investigating extreme classical electronic music and that takes me on a journey of learning. So, it’s never ending for me.

A lot of your music is about creating a mood or atmosphere. Do you always know the feeling you want to evoke before you start writing?

It’s a vibe straight away, but it can change as you develop the idea. I wouldn’t consider myself to be a songwriter (more of a writer of instrumental music), but I did a songwriting retreat recently with loads of really good songwriters. I found it really interesting and also painful. You were paired up with some quite prolific songwriters. It was nerve-wracking, but everyone seemed to feel that way. We would discuss lyrics and atmosphere, starting with the mindset of the lyrics and the story, and then let it reflect into the notes. By the end of the day, you’d gone from absolutely nothing – working with somebody you’d never met – to making a song. It was just about being together as musicians, and writing with people you don’t know.

What was that in aid of?

The retreat was run by a woman called Kathryn Williams, who is a great singer and songwriter. She organises these for no reason other than to just do it. She gets a bunch of people who make music for a living, mainly songwriters and instrumentalists, puts us together, and each day you get paired with a different person at breakfast. One day I was put with Graham Fellows aka John Shuttleworth, a comedy writer who makes up crazy songs, which was extremely out there, but very good.

I’ve seen a few videos of you surrounded by machines at home, exploring all the synths and modulators you’ve acquired over the years. Are they part of your inspiration process?

Everything I have has a purpose. I know what it will do, but I don’t know entirely what it will do, so that’s where the exploration comes in. They always surprise me. It’s not just electronic stuff; there are all sorts of instruments in there. I have an extensive collection of drums even though I don’t play drums. When people come round I get them to use my drums, so that I can get the sound I want from them. I produced a band recently with a fantastic live drummer, but he hit so hard that in the studio it was deafening, so I got him to use some of my drum kits which were a little more subtle.

What are you working on at the moment?

I just finished a feature film, writing and mixing with Will from Goldfrapp. It’s produced with the BFI, and will be called ‘Arcadia’. And I’ve just finished mixing another film we did called The Passion of Joan of Arc. We did it about five years ago, but we just recorded it live at Wells Cathedral and at The Globe in London. That’s coming out on DVD. Then I’m doing a thing about minimalist music for BBC4, looking at Terry Riley, Steve Reich, and other people. 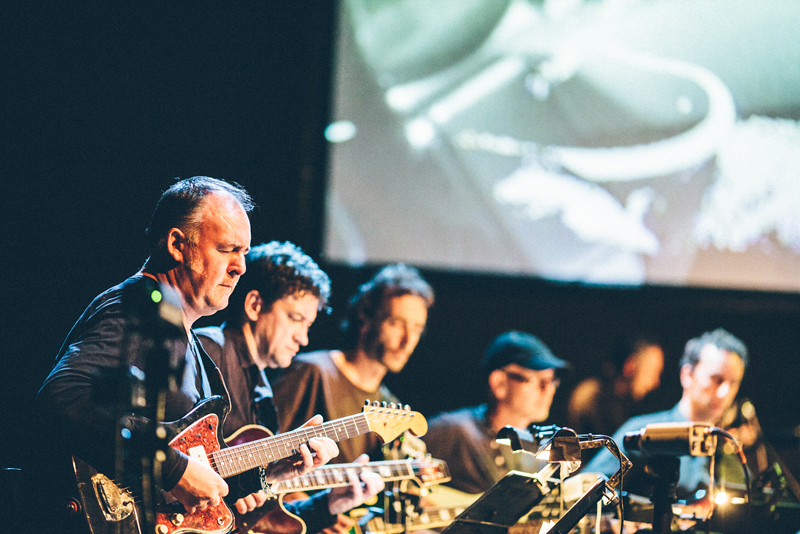 Are you being quite drawn over to the film score world?

Yeah, I am a bit. Although I wouldn’t want to do it all the time. Just like I wouldn’t want to produce bands all the time. Balance is good, if you have the opportunity. A little bit of playing, a little producing, a little writing. I need to do a bit more live playing now, although I certainly wouldn’t want to slog round the circuit so much anymore. I’d find it too exhausting. But I have got a guitar quartet I’d love to take to small venues. There are good experimental things you can do now, like pop up shows; go somewhere and play for 15 minutes then leave. I’m still coming up with ideas, but I want to play something other than just sitting in a concert room.

I guess the shorter our attention spans get in the digital age, the more likely we are to love a 15 minute show

It’s interesting to hear you say that. We say there’s no attention span, but then you look at one of the biggest TV shows in the world, Breaking Bad, and there are 90 episodes of an hour long each. So in some respects we haven’t really got low attention span, but then in others we really do. In culture, we seem to have a juxtaposition of things that are really fast, and things that are incredibly long at the moment. It’s a funny world we live in.

Arts Council England announces second round of funding – a further £1.5million for grassroots music venues. Following the launch of the inaugural £1.5 million Supporting Grassroots Live Music fund in May 2019, Arts Council England (ACE) today announces a second round of investment in the grassroots music sector with a further £1.5million available to March…

We are ridiculously excited to announce, in partnership with The Adelphi Club in Hull, Fatboy Slim on Friday 18th October 2019. This is one of the most eagerly anticipated intimate gigs the city has ever seen and see’s the legendary superstar DJ making a welcome return to Hull to take part in the venue’s 35th…

It’s Wednesday. Meaning everything is fully in gear, and Independent Venue Week is firmly on the road. Here’s the list of gigs happening this evening.

It’s been amazing, but it’s not over yet. Today’s gig guide is up, and it’s an absolute corker with a huge amount of variety of artists across the country.

#IVWTake5 will see two people sharing their thoughts and experiences of their life in music from early gig going in venues, shows they’ve loved, venues that mean a great deal to them and more widely how music has been such a positive influence in their lives. This ninth edition features last week’s guest SOAK having…